When 17-year-old Swati Billary from Akola began to have severe problems walking and urinating at the age of 12, doctors diagnosed her with 40 per cent scoliosis — a condition in which aperson’s spine is curved. She was put on medication, exercises and had to wear braces, but this troika seemed to have no effect, as the scoliosis progressed to a severe 98 per cent curve.


Swati (down), who is now recuperating at Sancheti Hospital, had a 98 per cent curvature on her spine, necessitating surgery. After two rods and 22 screws were inserted into her spine on Saturday, the teen now has a straight back


It was then, five years later, that Swati was referred to Pune’s Sancheti Hospital for specialised treatment, and advised to undergo surgery. On Saturday, Swati underwent a six-hour scoliosis correction surgery, in which two rods and 22 screws were inserted into her spine to straighten it.

Her father Tanaji Billary said, “At 12, Swati could not walk even half a kilometre without breathing hard, and experienced many other problems. We were advised surgery, which cost around Rs 2 lakh. Now Swati’s spine is only 4-5 per cent curved and it is under control.

Finally there is relief for my daughter.” Medical experts say that out of all patients diagnosed with scoliosis, common in a small percentage of adolescents, only 50 per cent require surgery. However, early detection prevents surgery, and surgical results are becoming increasingly satisfactory, with awareness rising among parents, doctors and teachers.

Dr Ketan Khurjekar, head of the Spine department at Sancheti Hospital, who conducted Swati’s surgery, said, “Three to four per cent of all adolescents are found to have some form of scoliosis or the other. Most are girls — it is four times more common in girls than boys — and the extremity of the curvature is more progressive.

There is a genetic pre-disposition in some adolescents for it; several cases have been observed in consanguineous marriages.” He added, “Around five years ago, around 80 per cent of patients came in late and needed surgery. Today, only around 40-50 per cent need surgery due to early intervention. In 2012, we saw at least 160 patients for this condition, out of which 85 required surgery.”

Dr Rajesh Parasnis, spine surgeon at the Oyster & Pearl Hospital, said, “The ideal age for surgery depends on premenarchal status, type of curve, degree and severity of spinal deformity. Broadly, 12-16 years is ideal for surgery, as curves are flexible and skeletal maturity is around the corner. Curves less than 15-20 degrees are observed for a while.

Curves between 20-40 degrees require bracing to prevent further progression, and those beyond need surgery.” Dr Jaydev Panchwagh, a neuro and spine surgeon at the Deenanath Mangeshkar Hospital, said, “Last year, I saw around 20 patients, of which only 30 per cent needed surgery. Early signs can be noticed by pediatricians. Increased awareness in the medical fraternity is helping it get getting detected at an early stage.

For very small children, plaster techniques and body molded jackets called braces or corsets are good options. Even if surgery is required, it should be done early on to attain maximum results.”

Scoliosis surgery involves the insertion of special surgical implants like rods, hooks, screws, and wires. The goal is to straighten and balance the spine and secure it in place, so that curve progression stops before skeletal maturity is reached. 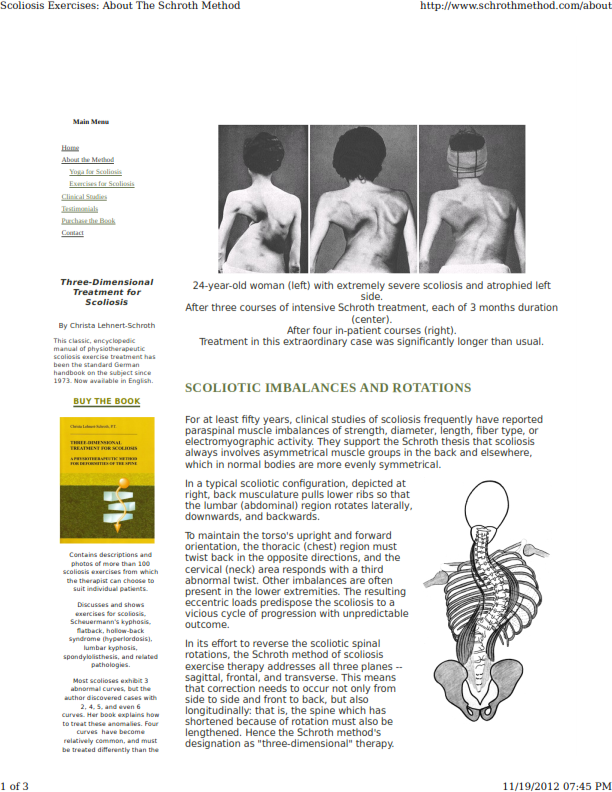 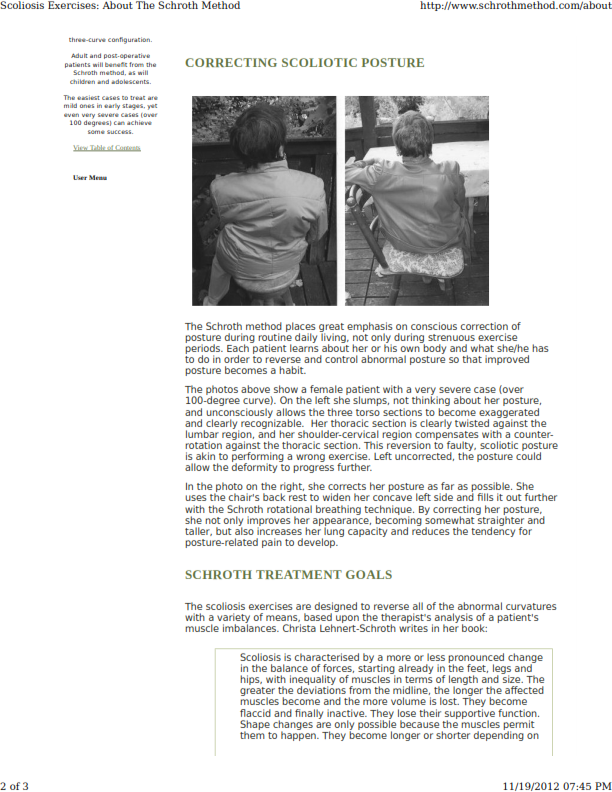 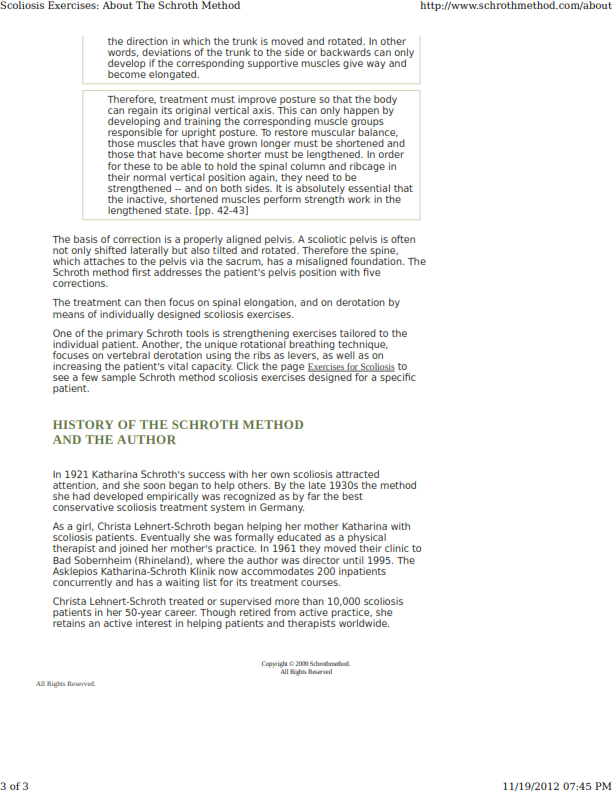 Source : SchrothMethod
Posted by SCOLIOSIS INDIA at 00:53 No comments:

YOGA AND SCOLIOSIS : DO AND DON'T 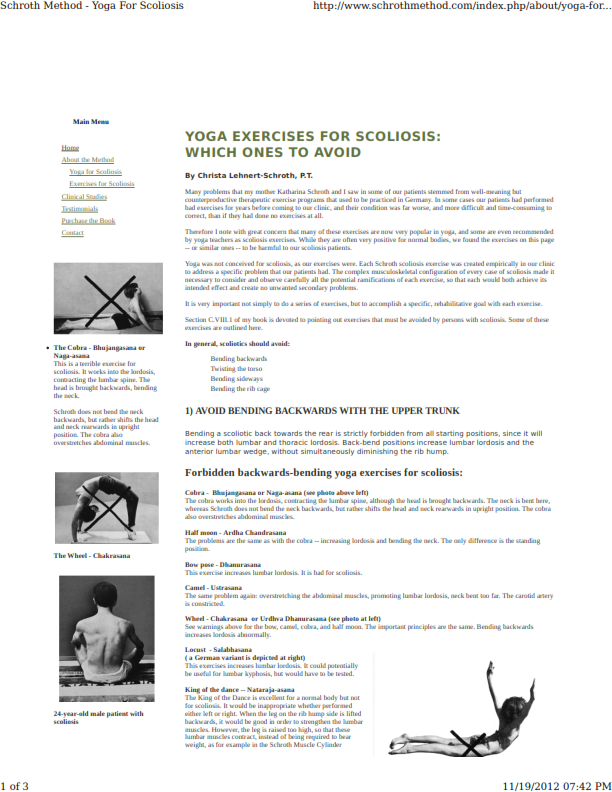 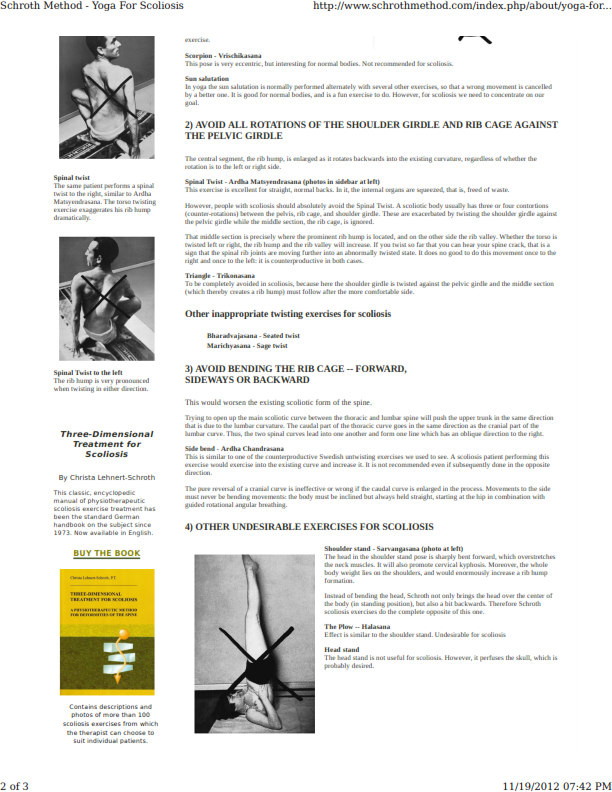 Posted by SCOLIOSIS INDIA at 00:40 No comments:


A teenager has grown an incredible five inches overnight after an operation to straighten his spine.
Harvey Legge, 14, was suffering from scoliosis, or curvature of the spine - and the bend was so severe it was crushing his vital organs.
He was referred to a paediatrician at Sheffield Children’s hospital who said his case was so severe he would have to have surgery.
The operation saw him grow five inches overnight, taking him from 4'10" to 5'3". His spine has gone from being at a 90 degree angle, to just a 20 degree angle. Twisted: Harvey Legge, 14, was suffering from scoliosis, or curvature of the spine. The bend was so severe it was crushing his vital organs

His mother Claire Walker, 39, said: ‘It really is wonderful to see. He now stands as tall as me - he literally grew five inches overnight after the operation once surgeons had straightened out his spine.
‘To see the X-rays of his spine before and after the operation really is remarkable. The surgeons have done a wonderful job.’
Mrs Walker, from Holton Le Clay, Lincolnshire, said: ‘It was a shock when he was first diagnosed with it.

'I’d noticed that his rib cage didn’t look level when he bent down, but I had no idea that it was anything as serious as scoliosis.
‘When I was told he would have to have surgery to correct it, I was devastated. But I knew that it was the only option for him.


‘The bend in his spine was so severe that it was crushing all his organs. His rib cage was banging on his hip and he used the other hip as a shelf to rest his arm. He couldn’t walk very far because he was so twisted.’ The operation saw him grow five inches overnight, taking him from 4'10" to 5'3". His spine has gone from being at a 90 degree angle, to just a 20 degree angle.


Doctors decided that because Harvey's case was so severe, they couldn’t wait any longer to operate on him.

Mrs Walker said: ‘We knew that he was very young to have this operation and it was nerve-wracking, but there was no choice.

‘Two months previously we had been on holiday to Italy and while we were sat around the pool, people were watching Harvey with their jaws dropping open. He was very conscious about what he looked like, too.’

Doctors warned the couple that there was a risk of paralysis with the operation, but they knew it was Harvey’s only chance as he was being suffocated by his own spine. But complications from the operation left surgeons fearing Harvey was brain dead after he lost his entire body’s worth of blood. He has since made a full recovery

The eight hour operation was carried out in November 2011 at Sheffield Children’s Hospital, where doctors put titanium rods either side of his spine to straighten it.
But complications from the operation left surgeons fearing he was brain dead after he lost his entire body’s worth of blood and his brain shut down.

Mrs Walker said: 'It was terrifying when he lost so much blood - we thought we were going to lose him. Harvey spent nine days recovering in hospital, and then a further three months recovering at home.

Mrs Walker added: ‘It was so amazing when he stood up and he was so much taller. He had always been the smallest in his class and now he is of average height which is great. Standing tall: Harvey with his mother Clare and surgeon Ashley Cole. He had always been the smallest in his class but is now of average height

‘He can now do contact sports and he can run too. He won’t grow any more, but it is fantastic that he is now so much taller than he was.

Ashley Cole, the consultant spinal surgeon who performed Harvey’s operation said: ‘It was a huge success and Harvey has recovered fantastically well.

‘We had to do the surgery much sooner with Harvey than many other children because his condition was progressing at such a fast rate.’