Bouncing back from setback 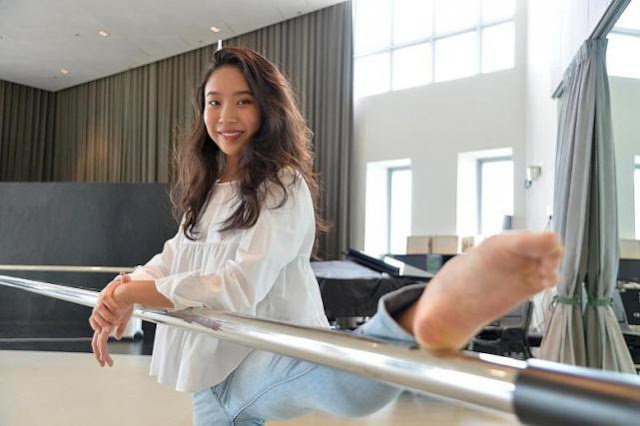 Miss Deanna Dzulkifli knew she wanted to pursue ballet professionally since she was nine.

At the age of six, she took up ballet as a co-curricular activity (CCA) at St Anthony's Canossian Primary School. When she turned nine, Deanna Dzulkifli was sure she wanted to pursue ballet professionally and when her teacher suggested she audition for the School of the Arts (Sota) International Baccalaureate (IB) diploma programme, the Primary 4 pupil decided to do it.

A year later, she was diagnosed with severe scoliosis - a condition where the spine curves so much that the ribs may press against the lungs, restricting breathing.
But that failed to derail her ambition and she joined Sota after her PSLE.
RESULTS
Yesterday, Miss Deanna, now 18, received her result for the 2016 IB examinations, scoring 37 points out of a maximum 45. Speaking to The New Paper, she said: "I am super happy about my results and I am really proud of myself." A total of 1,849 students here sat for the IB diploma examinations last November, and the overall pass rate was 97.32 per cent. Miss Deanne's result stands out because of her determination to overcome the odds - and pain.

For about five years, she had to wear a soft brace for 20 hours a day. Her condition continued to worsen and at 16, she underwent a major operation to have three metal rods inserted into her body to straighten the spine. Hospitalised for a week, Miss Deanne had to take a break from dancing for six months. She even had to re-learn how to breathe and walk. "It was very frustrating.

"One day I was doing turns, the next day I could not even walk," said Miss Deanna, who is mulling over her options for the future. After such an operation, most patients do not engage in physical activity for a year, but she was determined to continue dancing and persuaded her doctors to give her the green light six months after surgery.

Once she was cleared to do so, she did stretching and strengthening exercises, occasionally booking a studio for simple exercises to get back to form. Miss Cheah Mei Sing, the Head of Dance at Sota, said: "It was the hopefulness in her eyes. "It was a matter of harnessing that hope and partnering it with her passion for dance to steer her through the ups and downs of her course." Miss Deanna acknowledged her passion for dance was vital. "Although starting from scratch was frustrating, to me it was like a spark and I just pushed harder," she said. "Strengthening myself is still a work in progress, but I can't imagine what I'll be without dance."

Dr Bhaktavathsalam expressed confidence that the boy would even be able to play football in another six months. He said Idiopathic scoliosis usually affects girls, either before or after puberty and such occurrences in was pretty rare in boys.

Doctors in Coimbatore gave a new lease of life to a 14-year-old boy from Kolkata suffering from a rare spinal cord disorder. The boy's spinal cord was in an 'S' shape and doctors at a city hospital had to perform a nine-hour surgery to correct it.
The boy was diagnosed as having 'idiopathic scoliosis,' a condition in which his curved spinal cord made him bend too low to the extent of 100 degrees to the left side.
He was brought to KG Hospital, where a team of doctors, comprising orthopaedic and spinal surgeons performed a nine-hour operation to set right the spine. After spending three days in the Intensive Care Unit and two days on ventilators, the boy was shifted to the ward room and would be discharged in another couple of days, Hospital Chairman Dr G Bhakthavathsalam said in a release.
After the corrective surgery, the boy gained 8 cm height and started standing and sitting erect and breathing easy, he said, adding it was a 'cosmetic and functional surgery' as not only had the boy's physical appearance got a facelift, but his normal activity had also improved.
Dr Bhaktavathsalam expressed confidence that the boy would even be able to play football in another six months. He said Idiopathic scoliosis usually affects girls, either before or after puberty and such occurrences in was pretty rare in boys. Only one person per one lakh population is susceptible to it, he said.